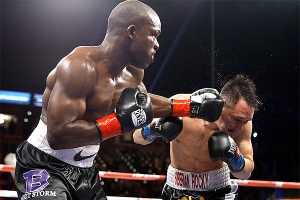 “The outcome was as expected: Tim Bradley won a unanimous decision over Ruslan Provodnikov last night at the Home Depot Center in Carson, California. But the expectation that Bradley, openly frustrated with his career, was being given a palliative in Provodnikov was quickly turned on its ear. Over the course of twelve harrowing rounds, Bradley was repeatedly pushed to the threshold of his resolve by the incorrigible Provodnikov. However much the boxing community may have considered Bradley an imposter on the throne, Provodnikov treated him like a king, and, against such distinguished opposition, looked to overthrow royalty.”