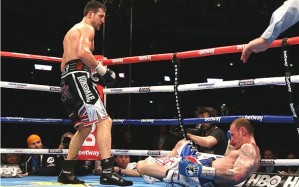 “Froch is, in many ways, a cliché: he is a man’s man, a warrior, tough as nails; however lazy the use of such terms may be. There are exceptions to every rule, however—is that not itself a cliché?—and Froch, an exception to many a prizefighting rule, is perhaps an exception to the rules of good writing as well. Calling Froch a real fighter, reducing whatever he brings to a prizefight—be it textbook or unorthodox, familiar or idiosyncratic—to a handful of overused phrases does not diminish the praise. What he has accomplished over his 12 year career may not be legendary, but Froch makes fun fights against top competition, and it is no small criticism of the current state of boxing that this distinguishes him from his peers. Nor should boxing’s weak state diminish what he has accomplished: Froch is no less the fighter because general expectations are low.”