Thinking About Cicadas And Family 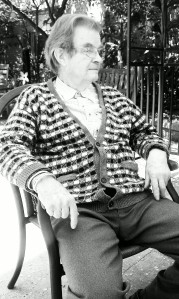 It was a time when the UHF dial made finding a station akin to cracking a safe. Accident could be the only explanation for boxing being on the screen. Or perhaps it was desperation, believing as I did that any television was better than no television; that interest in any show could be feigned of course, lest the argument to extend bedtime find no justification. If I looked interested I might bargain for an extra half hour, spend 30 less minutes in the dark with the creaking closet doors, the hatch to the attic, and an overactive imagination.

The combatants in the ring that night have long since left the profession and my memory. It’s safe to assume that the channel too has left boxing in the distant past. But a nebulous intrigue in the action itself, those two men punching each other in the face—in the face!—would remain, growing like a cicada, slowly, imperceptibly under the surface. There was something undeniably captivating about the idea of men punching each other. What would hitting someone in the face feel like? How would it feel to remain standing while watching the other guy fall? Was it worth it if it meant getting punched back? And what if you lost and everybody knew?

A combination of strategy and genuine interest had me milling my arms at the skinny blonde antagonist reflected in the curio cabinet. Seeing me winging punches in the air, my grandfather asked if I liked boxing. At that point I couldn’t say one way or the other, and responded with a politician’s “Yes.” He told me that he had done some boxing as a kid, having even won a tournament as a teenager. “But there was one guy I could never beat,” a smile forming on his face. “After a few goes of it, I wouldn’t even spar with him.”

He put his hands up in the manner of John L. Sullivan: fists extended a bit too far from his chin for any modern trainer, leaning back with his weight on his back foot. “They taught us to box like this,” he said, as he drew little circles in the air with his fists. “But this one guy, he had a stance like this,” here he rotated his right shoulder back, his torso now almost perpendicular to mine. “And he had his front hand way down here.” I didn’t know it at the time, but I was looking at a quinquagenarian Roy Jones Jr.

“This low left, boy, he’d wind it up on you. I could do alright with him, but when he hit you with that low left, he really walloped you.” A chuckle accompanied this confession; the frustration of having his bell repeatedly rung had become nostalgic over the decades. “Sheesh. He dumped me on my butt a few times with it.” I was baffled by the idea that getting punched in the face could be funny, but here was proof. And issued from the lips of this shy and erudite man, no less. His story complete, he sent me to bed. It was probably thirty minutes past my bedtime. Mission accomplished.

A few years later, and after countless unsuccessful searches I’m sure, my grandparents presented me with a ring for my birthday. “Your grandpa won this boxing when he was a kid,” my grandmother told me. I took the ring in my hands, turning it over like an amateur appraiser. A thin gold band, bent from wear, with a white gold face, and the letters ET, for Edward Tobin, etched into it. His name and mine, save for the J (a letter that hurt him so deeply that my mother gave me the middle name Edward to lift his spirits). I’m confident that he had forgotten our first discussion about boxing, but my interest in the sport was something he had picked up on. The cicada had finally surfaced, and was singing incessantly. If there was any pride in sharing this trophy with me, I couldn’t read it in his face. He feared things, this much I knew, but pride in anything but his grandson—of this I was far less certain.

Last week marked the year anniversary of his passing. I last saw him the day before flying to Las Vegas to watch Manny Pacquiao challenge nemesis Juan Manuel Marquez for a third time. He sat hunched in his latest rocking chair, depleted as much by treatment as by disease. I put my hand on his, having taken to physical affection with the inevitable so quickly approaching.

“I’m goin’ to Vegas tomorrow,” I told him, feigning high spirits, smiling through the liver shot.

“I’m gonna meet up with my friends and watch a fight.”

“You take care of yourself, an’ I’ll fill ya in when I get back.”

“Okay…but I told them don’t do anything extra.”

I often think about this final sentence; an ugly truth, but surely harder to hear than say. It was as if he had been encouraged for so long to endure suffering that he was finally taking a stand for his right to take his leave. My marking a point in the future, and making a request for him to meet me there, was something he would not agree to. I left the retirement home that afternoon free of illusions and expectations. When I called my grandmother two weeks later and my aunt picked up, I knew. I was told he said goodbye to his wife, and that the doctors didn’t do anything extra.