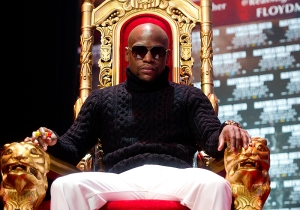 In his essay “The Tyranny of Visions,” Thomas Sowell writes that visions are inescapable because of the limits of knowledge (one might argue this limitation holds their appeal as well). The crucial question for Sowell is “whether visions provide a basis for theories to be tested or for dogmas to be proclaimed and imposed.” With Mayweather, the vision has grown as the tests have receded. This is not entirely his fault of course, as he has run through the gamut of realistic challenges and is facing arguably his toughest available test next (barring some overweening request that he face a middleweight). But there are glaring omissions in Mayweather’s impressive record—like Manny Pacquiao and Antonio Margarito—and asterisks abound: neither Shane Mosley nor Miguel Cotto were in their primes when Mayweather agreed to face them. And saying that Mayweather would have beaten these men at their best is not much of a rebuttal—such conjecture only reiterates the vision. The point is that the opportunity to test the vision of Floyd Mayweather, Jr., has largely passed, leaving us with the proclamation of dogma.