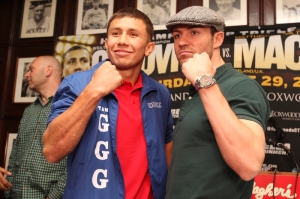 However destructive middleweight Gennady Golovkin’s career has been to this point, it has largely been the product of the how—not the whom. This is not to belittle the accomplishments of a fighter who has compiled a record of 26-0 with 23 knockouts: in boxing, the best platform for raising your profile remains the scaffold, and it is unlikely that either HBO or the public they occasionally represent becomes as enamored with Golovkin without the carnage he produces. But skepticism persists, primarily because ruining the likes of Nobuhiro Ishida does little more than emphatically restate the obvious. What Golovkin has long needed—and has struggled mightily to secure—is an opponent whose undoing would silence the critics. This Saturday, from the MGM Grand at Foxwoods Resort, Mashantucket, Connecticut, he faces just such a man.

Read The Monster Under The Bed: Gennady Golovkin-Matthew Macklin Preview on The Cruelest Sport.