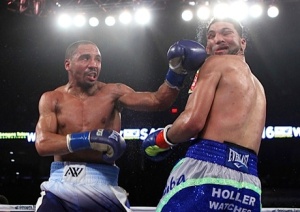 In close, Ward isn’t looking for a breather, and unlike Bernard Hopkins, he is not there to clown. No, when Ward is in a clinch, he is looking to hurt. Using his feet to take angles, Ward snarls and strikes like a wolverine in a snare. This does not make for a pretty fight, nor does it absolve Ward for the dirty tactics he regularly employs. It does, however, reveal an understanding of craft missing from the fighters he so easily dispatches. Ward dominated Rodriguez, 24-1 (16), wherever he wanted, and by the middle rounds had complete control of the fight. When the twelve rounds of target practice ended, the scores read 118-106, 117-107, and 116-108 for Ward.