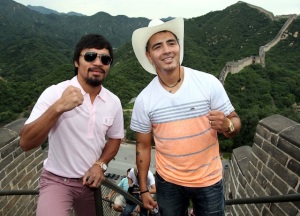 “It is the wrong way to end a fight: looking more like the victim of a skydiving misadventure than the loser of a boxing match. Yet, this is how welterweight Manny Pacquiao found himself last December, when Juan Manuel Marquez so stunningly nailed him into the MGM Grand Garden Arena canvas. It is hard to believe that the most memorable moment in a career as improbable as Pacquiao’s may now be a loss. This is not to mistake it for the most defining moment. No, there are too many images of his hands raised, his foes broken, to trump his furious run. Pacquiao, 54-3-2 (38), will always be defined by his wins; by the performances he delivered securing them. But how he responds to the Marquez loss could determine his future in ways none of his previous fights could. For the first time in his career, Pacquiao, who faces Brandon Rios at the Cotai Arena in Macau, China, Saturday night, is faced with questions not even he can answer. Or maybe it is just one question: Is Manny Pacquiao finished as a prizefighter?”