IBR on the Cruelest Sport 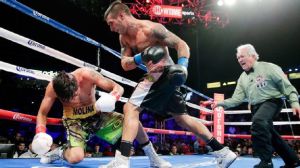 “Since Danny Garcia outpointed him last September, Lucas Matthysse had committed himself to the rites of the defeated: there was a change in his corner, delays and mixed messages about his return, and probably, squeezed somewhere onto his crowded flesh, a palliative tattoo. He would speak of what he learned in defeat, too; that small victory for the loser so crucial to dreams of reascension. And to the ring in the StubHub Center in Carson, California, along with his trunks, gloves, gumshield, he brought a grim look that seemed shaded in hesitation.”