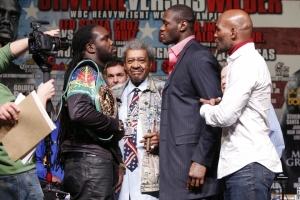 Granted, it has been against forgettable opposition, but Wilder, 32-0 (32), has been snatching time from opponents since he turned pro in 2008. Having never fought through adversity, or even the fourth round, having never faced an opponent expected to do more than crumble under the first surge of hostility, Wilder’s achievements are not reflected in his gaudy record. However, considering the reactions of his opponents when he lands—all that spasming and silence—Wilder’s power seems legitimate. There is something frighteningly definitive about the finality he represents. One wonders not so much about whether Wilder’s fists are the genuine article, but whether the rest of him is.