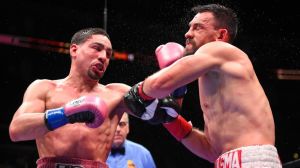 “Saturday night at Staples Center in Los Angeles, California, Danny Garcia outpointed Robert Guerrero over twelve rounds in a fight good enough to momentarily muffle the anti-PBC rhetoric and not good enough to warrant a second viewing. A typically current affair, then: one criticized for failing to meet lowered and lowering standards while being defended as no worse than the rest. The truth, less convenient than the people who most fervently claim its possession would assert, is no more likely to be found in the middle than it is in the extremes; but Garcia-Guerrero will neither turn away current aficionados nor create new ones. It is the latter of these two outcomes that the PBC professes to be concerned with and its failure in this regard is proof that the packaging has not supplanted the product.”