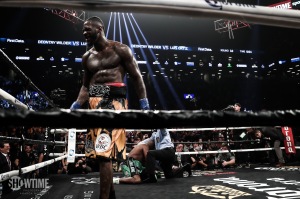 “Saturday night, at Barclays Center in Brooklyn, American heavyweight Deontay “The Bronze Bomber” Wilder made the seventh defense of his title, knocking out Cuban, Luis “King Kong” Ortiz in ten rounds. In a tense and sporadically torrid fight, Ortiz went loudly to his fate, but Wilder, always louder, left him silent in the end. A right uppercut, the brutal punctuation to another of Wilder’s inarticulate tantrums, broke Ortiz, leaving him bowed like a penitent.”

Read Come As You Are, Deontay Wilder on 15Rounds.com