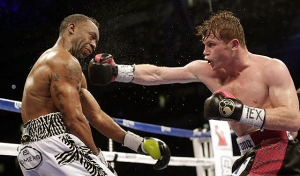 “Junior middleweight Saul Alvarez has long endured the criticism that he was a pampered and protected golden calf, a fighter whose popularity and earnings were disproportionate to his achievements. And this is true. The response to such cries, of course, is that Alvarez is a defense in himself: he makes truckloads of money grinding the husks of the welterweight division because he is worshiped for more than his performances. Nor, for that matter, is his godliness self-ascribed, but rather bestowed by the sanction of the masses. In a sport where all pursue maximum reward for minimum risk, Alvarez need not apologize for anything. Included under this all-encompassing “anything” is the hard-fought decision he earned last night when 39,472 fans packed the Alamodome in San Antonio, Texas, to see him win a unanimous decision over Austin Trout.”