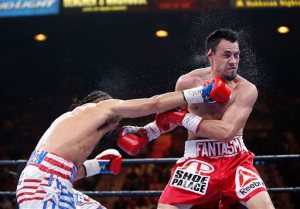 “Whatever sums Al Haymon paid for last night’s inaugural Premier Boxing Champions broadcast from the MGM Grand in Las Vegas, he paid in the name of control. If aesthetics are any indicator of cost, Haymon spent heavily. Rarely do the theatrics of American boxing broadcasts achieve the splash of the casinos that house them; that the PBC production tried shows that Haymon understands the value of first impressions. The extravagance of the PBC broadcast should also serve as an indicator—and to his competition, fair warning—that the control Haymon is pursuing goes beyond the pageantry of production and the creation of an alternative to premium cable offerings.”