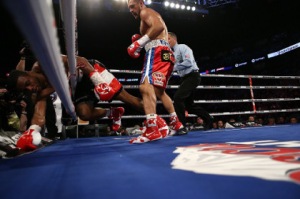 “Born in Port-au-Prince Haiti, but now living in Laval, Quebec, Pascal was, in a sense, the wrong fighter in the ring. Serving as a sort of stand-in for fellow Haitian-Canadian Adonis Stevenson—who bolted for the security of Al Haymon’s insular universe when the drums for Kovalev beat loudest—Pascal was the next best man for the job. Unorthodox, athletic, and a proven draw in Montreal, Pascal resembled Stevenson closely enough to keep the “what if” scenarios churning in the shame campaign Main Events has conducted since Stevenson made his much-maligned business decision.”

4 thoughts on “IBR on The Cruelest Sport”