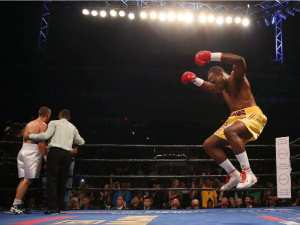 “Chatter from the VIP tables was not about how Chris Van Heerden, for all his plucky insolence, at no point posed a threat to welterweight Errol Spence, or how Tommy Karpency was given the opportunity to face Adonis Stevenson in part because the crisp right hand he landed in the second round would be as close to victory as Karpency would ever come. If the PBC’s plan is to obfuscate what prizefighting should be about—two men of comparable ability paid to harrow each other in a spectacle of unmaking—and replace it with gatherings where violence is a backdrop to a social event, where the celebrity of the fighters supersedes their achievement and the pageantry of the proceedings is the primary criterion of its quality, Toronto warrants a return.”