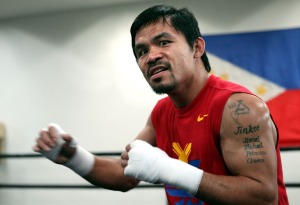 “What is left is a fighter still so formidable he need fight but a sixth of each round to pocket it, and then coast the rest. And that sounds very much like the approach Mayweather used. It was one that earned Mayweather, the greatest defensive fighter of his generation, the slings and arrows of most everyone looking for drama and daring in a prizefight. For the greatest offensive fighter of his generation to employ a tempered assault, however, regardless of the explanation for it, is doubly disappointing, and requires we look other than to Pacquiao’s idiomatic violence to celebrate his performances. Yet it was Pacquiao’s violence that endeared him even to the Mexicans whose native sons were left in his wake. Violence is what made him.”

Read The Wrong Kind of Predictable: On Manny Pacquiao on UCN Live.