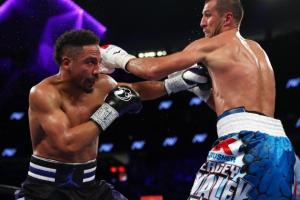 “The outcome is likely to be debated long after Ward and Kovalev have put the fight behind them; and for the most tenaciously outraged, perhaps even after the rematch—which there almost certainly will be—has provided some vindication. Because the explanation for Ward sweeping the last six rounds on two judges’ cards and picking up five of those six on a third, is near impossible to find in what transpired in the ring. This is not to imply judging corruption, only a sort of laziness, the judge’s fallacy that reasons that since Fighter A is no longer having the same success he had in the early rounds Fighter B must be winning. While it is true that Ward adjusted to Kovalev, and those adjustments got Ward back in the fight, the case that they won it for him was made most forcefully by people other than the “Son of God.””

Read At Least the Respect Was Deserved: On Sergey Kovalev-Andre Ward on 15Rounds.com.