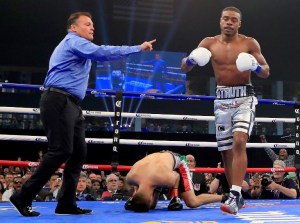 “Saturday night, at The Ford Center at The Star, in Frisco, Texas, Spence needed less than a round to sickle Carlos “Chema” Ocampo in two. A left to the belly and right hook to the body took Ocampo’s breath and emptied the lungs of the 14,000 people in the arena to see their native son incarnate his reputation. And while the matchmaking, forgettable, uninspiring, all-too-typical of a homecoming showcase or risible mandatory defense (and Ocampo represented both), was disappointing, Spence was not. Because that is what you do to an undeserving opponent you openly admit you would rather not have to fight: swiftly and spectacularly shatter him.”