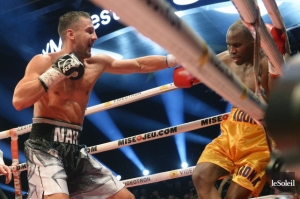 “In years past, Stevenson would have turned to matchmaking to mitigate that conspiratorial threat. Indeed, his nine-fight reign as WBC light-heavyweight champion is likely to be remembered for the safe run of derelict defenses that allowed him to line his pockets late into his thirties. It was a tactic that vilified Stevenson. Already loathed by many for again turning violence—the dominant and dominating characteristic of his treatment of women in the rough trade of his youth—into profit, and for doing so with a fighter’s conceit, Stevenson’s seeming aversion to danger only turned people against him harder. That he depicted himself almost as a man more sinned against than sinning when pressed about his past did nothing to repair his image. There was a sense that if he had paid a little more in the ring, where violent men sometimes meet violent ends and justice is strangely tethered to entertainment, Stevenson would not have been the persona non grata he was.”